Clerical errors in the drafting of your will can have the very serious consequence of frustrating your true wishes. As a High Court case showed, however, judges thankfully have the power to correct them even after you are gone. 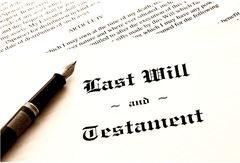 The case concerned a retired joiner who, on his death aged 80, left an English estate worth more than £1.6 million after tax. He also had substantial assets in Ireland, the country of his birth. His will, as drafted about four years before his death, split his estate into 10 equal shares to be divided between his five surviving siblings and the five children of a sister who died before him.

One of his brothers, who was also an executor of his estate, launched proceedings under Section 20(1)(a) of the Administration of Justice Act 1982 seeking rectification of the will on the basis that it contained a clerical error. He argued that the intention of the deceased had been to split his estate into six, rather than 10, parts and that only one of them should be divided between the children.

In upholding his arguments and rectifying the will accordingly, the Court found that an error had been made when the document was typed up which had escaped everyone’s notice when it was formally signed. The will as drafted did not give effect to the deceased’s true testamentary wishes and conferred on the children an unintended windfall.

Two of the children had resisted the application on the basis that the deceased was domiciled in Ireland on his death and that the English courts thus had no jurisdiction to rule on the matter. The Court, however, found that he had made his life in England after moving here in the 1970s and that this country had thus become his domicile of choice by the time he died.

The application to rectify the will was not issued within six months of probate being granted, as it should have been, but the Court found that it was just and proper to extend that deadline. The consequences of the error would have been severe if it had remained uncorrected. Under the will as drafted, the children stood to inherit £167,436 each, compared to £33,487 each under the rectified document.