One of the most controversial aspects of divorce is the extent to which pre-existing family wealth should be taken into account when dividing assets. A case on point concerned a couple whose comfortable lifestyle was throughout their 22-year marriage underpinned by the wife’s family trusts. 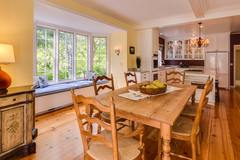 During the marriage, the trusts had funded the school fees of their three children and provided by way of loans the capital required for various house moves. When they separated, they were living in a farmhouse valued at over £7 million. The wife did not work, instead devoting herself to childcare and home-making, and the husband’s income as an insurance broker would, in the absence of support from the trusts, have come nowhere near to supporting their standard of living.

Ruling on the financial aspects of the divorce, the High Court noted that the wife had items of personal jewellery worth £750,000 and kept a string of polo ponies. The trusts had been generous to her in the past and could be expected to continue to be so in the future. Although she, or she and the husband jointly, owed substantial sums to the trusts, the court was confident that her significant income from that source would continue and that she would be able to carry on living in the former matrimonial home.

Given the extent of the wife’s family wealth, which had not been built up during the course of the marriage, the husband sensibly accepted that his award should be assessed on a needs rather than an equal sharing basis. He said that his primary concern was that he should not feel disadvantaged in what he could offer the children by way of lifestyle when they stayed with him.

The Court found that the husband had overplayed the poor relation card and that his claim for a £5 million lump sum was excessive. He was ordered to transfer his share of the former matrimonial home to the wife and was awarded a total of £3.27 million, including his £320,000 pension, in order to meet his reasonable housing and income needs.

Taking into account the money owed to the trusts, the husband’s award represented over 70 per cent of the former couple’s total personal assets, including the wife’s jewellery, of £4.55 million. The court was, however, confident that, with the continued support of the trusts, the wife could afford to meet the award, which represented a fair balance following a long marriage.